I like ropes, I like tying hands above the head and making my wife stand on her tip-toes. Due to injury we do not do this much; but I have always been faced with a bit of an issue.

How do you hang a hook in your bedroom, family room or other space where friends, children, and family are sure to see.

In our case, the basement was an easy solution, there is a drop ceiling so you slide a panel and you have a mounting point on a joist.

The workroom in the basement was also an easy fix, mix in some workout equipment and pull up bars can due double duty.

The bedroom however, presented a tougher challenge. A hook hanging from the ceiling would look bad and I guess you could claim it was for a potted plant; but that would need to be close to a window or wall. I wanted a hook closer to the middle of the room.

To address that, in came a couple of ideas:

First there was exercising, how can this double as something that I can easily explain?

Second, came some spare lumber and a quick online purchase of an “access panel”. Fortunately our bedroom is on the second floor and we have an unfinished attic above us.

Once the access panel arrived, which really just a metal frame with a metal door and a magnet – It is almost flush against the ceiling once mounted, I found a spot between the ceiling joists and used the panel template to cut out a hole.

Then I used some 2X4s to create a box between the joists and placed a 2X6 on top of the joists and the 2X4s I had used. I screwed everything into place then drilled a hole in the 2X6 and hung a half inch eye bolt there.

I sealed everything up with foam insulation and covered over the top with attic insulation to make it look nice from above.

From the eye bolt I am able to hang just about anything.

To take advantage of the hook and to make it look “friendly” I purchased a climbing “bomb” so I can do pull-ups and exercise when I am not tying my wife up.

The project took less than a half an hour and looks like this with the “bomb” in place: 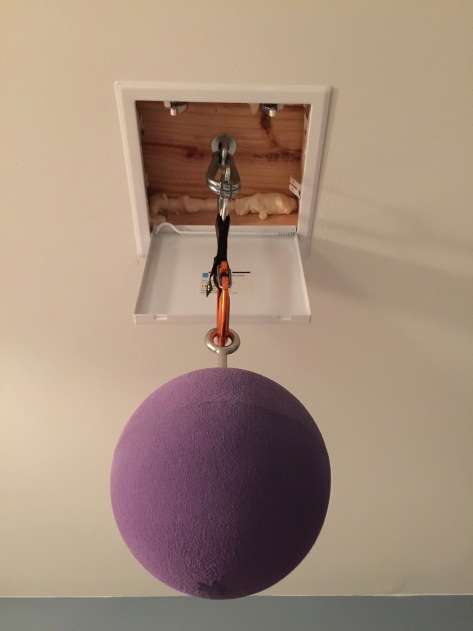 Not completely hidden; but easily explainable when my mother comes over and asks why there is an access door to the attic in the ceiling…

2 thoughts on “Suspension, family, and friends…”